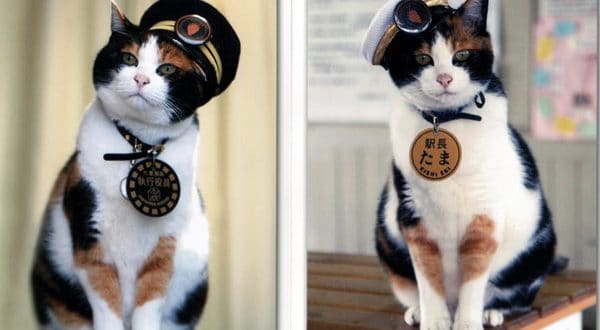 This story goes back to the late 1990s with a young calico called Tama who lived near Kishi Station – the final of 14 stops on a 14.3km line that connects small communities to Wakayama City, the region’s hub. Tama would frequently hang out by the railway, soaking up affection from commuters. Over the years, her sweet nature and photogenic features made her popular with the commuters, and adoring onlookers affectionately began referring to her as Kishi’s ‘stationmaster’. Despite challenges to keep the line open due low demand, residents convinced the authorities to revive the line in mid 2000’s. Since then, cats have been a constant presence and January 2007 Tama was officially named the ‘Stationmaster of Kishi Station’ – the first feline stationmaster in Japan. As stationmaster, one of Tama’s duties was to be the face of the railway and appear in promotional material and media coverage. Tama was so adored by riders and railway staff that a painted portrait of her was soon commissioned, which now hangs alongside numerous glossy photos of her in Kishi Station’s souvenir shop – where visitors can buy everything “Tama”. She passed away in 2015, aged 16 years, and now one of her former apprentices, eight-year-old Nitama (means ‘Tama Two’), serves as the Kishi stationmaster, with four-year-old Yontama (‘Tama Four’) functioning as her feline assistant five stations away in Idakiso. And SanTama (‘Tama Three’) ? She’s currently an employee of Japan’s Okayama Electric Tramway and serves as the acting director of the Okaden Museum.