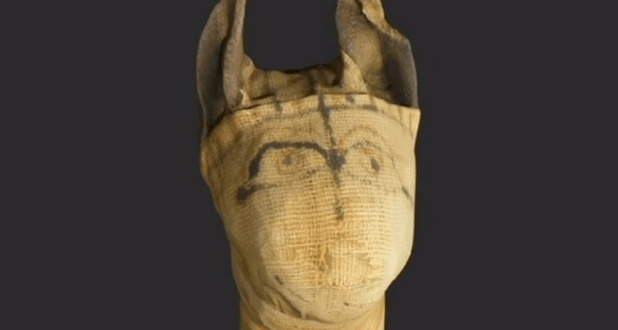 Behind the scenes at the University of Aberdeen Museums, researchers are using high-tech 3D imaging software to reveal what is inside a 2,000-year-old Egyptian cat mummy and other ancient mummified artifacts in the museums’ collections.

Scientists were able to study the mummified cat for the first time using a medical CAT scanner (no pun intended). Once they pieced together the 360-degree X-ray images taken by the machine, the researchers found something much smaller than they expected ­— a tiny kitten embalmed and bulked up with bandages to make it look bigger. [Photos: 1,700-Year-Old Egyptian Mummy Revealed]

Household pets were commonly mummified and buried alongside their owners in ancient Egypt. Many were also preserved as sacred offerings to the gods, and an entire industry existed that is thought to have churned out more than 70 million animal mummies, BBC News reported.

“You’d make more money selling a big mummified cat, compared to a small one,” Neil Curtis, head of museums at the University of Aberdeen in Scotland, said in a statement. “It looks like the cat’s neck had been broken, so it’s quite a gruesome tale really, but it gives some insight into what daily culture and customs existed around these temples in Egypt at that time.”

Many other museums have made similarly surprising discoveries after examining CAT scans of what was inside their relics. For example, curators at the Field Museum in Chicago found that some of the animal mummies in their collection didn’t contain any animal material at all but were filled with other organic material instead, such as leather, gravel and reeds, reported The Art Newspaper.

Researchers have argued that these mummies don’t actually represent a hoax, according to CNN. The mummies stuffed with smaller objects may have been cheaper alternatives made using items that represented the real animal that was supposed to be inside.

Nevertheless, 3D scanning technology allows scientists to virtually “unwrap” whatever is inside these ancient, sacred items. Researchers can also use it to understand details about which species lived in ancient Egypt, how they died and what they meant in Egyptian culture at the time.

The imaging technology makes fragile artifacts more accessible for both archaeologists and the public, Curtis said. And his team plans to make interactive models of their mummies available online so anyone in the world can access them, explore the texture of the bandages, zoom in to the remains inside and learn about the mummies.

“By making these available we are contributing to international scholarship as well as our own teaching,” Curtis said.